This 3 ingredient macaroni and cheese is as easy to make as it sounds! You won’t want to buy the fake packet mac & cheese again! Kids can be fussy eaters, especially when they are little, but there is one thing that ALL kids like: pasta and its kid-friendly incarnation of mac & cheese. You are probably wondering why I have emphasised that the macaroni and cheese in this recipe is real. Well, it’s because it is made out of real, unprocessed ingredients:

Unlike its fake counterpart: the packet stuff readily available from the supermarket. If I was to recreate the exact same flavour and texture of the fake macaroni and cheese, the ingredients list would look something like this:

I’m no expert, but it’s pretty easy to spot the difference.  There is very little in that list that resembles anything remotely unprocessed and natural. And look at all the salt (339,340, 341, salt) – a serving of this stuff makes up nearly 25% of the recommended daily intake! Concerned yet?

I hope so, because the following recipe will help you make real mac & cheese with ease. It only takes a few minutes longer to prepare and I’m pleased to say that it passed the taste test with flying colours! Hopefully, you’ll think twice now about making the fake packet stuff… 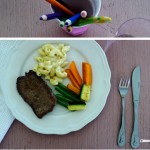 Forget fake packet macaroni and cheese full of nasty additives and preservatives. This 3 ingredient Mac & Cheese is as easy to make as it sounds!
Servings: 2 -4

For the Mac & Cheese:

For the Minute steaks and veggies

To make the mac & cheese:

In the meantime, prepare the steaks:

!#Tip:
I like to cook my veggies in the same pot to save on water and washing up. Remove veggies with tongs when the pasta is al dente. Drain away the water and return pot to heat.
!Recipe at Wholesome Cook
Tried this recipe?Mention @wholesomecook or tag #wholesomecook

yum i do love a simple homemade mac and cheese!

Yay! Thank you too – I enjoyed your writing and will be back :-)

Very good point Martyna. Fake Mac and Cheese is a bit of an anomaly. They shouldn’t be selling that. It’s so easy to make Real Mac and Cheese. And it’s heaps tastier too!

Fabulous post! Go real, all the way :) I may make this for Ben tonight – he’s like a kid. Maybe add some paprika too!
Heidi xo