French Tea Cake is one of Mr Chipconnoisseur’s favourite desserts. It’s quick to make, fragrant with warm notes of cinnamon and vanilla. And, as any good French dish would have it, just the right amount of butter. The idea to add fresh cherries to this otherwise plain tea cake came from my Dad. Back in his home liqueur making days, he used to make a kirsch like no other. His was infused with vanilla beans and a hint of cinnamon for good measure. The flavour was rich, complex and very much suited for winter. While local cherries are only available in Australia around Christmas, I have used fresh US cherries which are currently available in stores. But I am pretty sure that when out of season, pitted Morello cherries (in jar) would also be great. Dousing the tea cake with brandy or port is completely optional but it adds to the cake’s appeal in my opinion. And since I’ve reduced the amount of sugar from the original, if you like your cake a little sweeter, you could also drizzle a tablespoon of runny icing all over the top if you prefer. Or serve it with vanilla ice cream like I have. Yum! 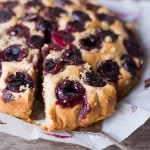 For the French Tea Cake:

For the Cherry Topping:

To make the Cake:

Your photos of this cake are stunning! So much better than the one in the original recipe ;-)

I really like how you’ve pitted the cherries it’s very nifty of you. Drooling all over my keyboard.

How beautiful! I love the rich color that the cherries give the cake. This would be such a perfect afternoon snack.

Wow, my jaw dropped when I saw this.

Just saw this on FoodGawker and I have been staring at the screen for the past 5 minutes. Fantastic shots. So moody and deep. Love it – nice blog.

lovely; will try this out sometime :)

You are welcome Amy. Check out the Gluten Free section for more delicous recipes and come back next week for my allergy-friendly free e-cookbook launch. :-)

Lovely Marty, very similar to a cherry cake that I make at Christmas time

Stunning photos!!! I’d love a slice of this with my cup of tea right now.

What a beautiful cake! Strangely I rarely bake with cherries, but I should because they look so lovely.

Thank you Sissi. It’s the first time I baked with cherries actually. I liked that they held their shape pretty well and remained quite juicy and “meaty” :-)

Wow lovely!!! I love cherries and this cake is absolutely gorgeous!

Wow, great cake. And beautiful photos – I just wanted to dive into my computer screen and eat some!!

Since Hubs is not a cherry fan, I’m wondering how it would taste with raspberries instead…

I think it would be ok, although the raspberries might not hold their shape as well… Could try peaches or nectarines too?

So cherryfic! I love it!

Um didnt anyone else notice you left out the cinnamon in the actual recipe steps?! I forgot too, Ive dusted it on top before cooking… wont be the same but hopefully will add something at least! Havent tried it yet so cant rate but Im sure it will be yum :-)

Thanks for bringing that to my attention, will fix!

Cool :-) Still worked out quite nicely, very light and fluffy!

Gorgeous, Martyna! My mother makes a cake so similar to this one – seeing it here really tugged my heartstrings in the nicest way :) Yours looks stunning.