It only takes 5 ingredients to make these delicious Sticky Five-Spice Pork Ribs, accompanied with a light and crunchy Red Cabbage Slaw. 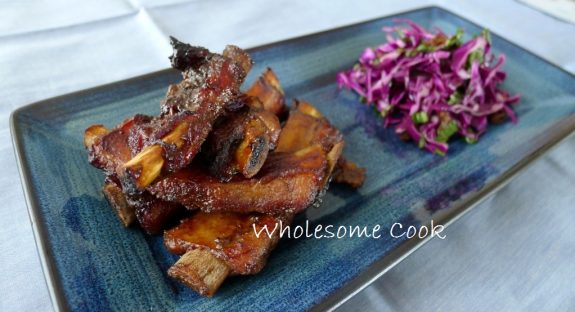 I have to admit these are the best home-made ribs I’ve ever tasted and I have tried a few different combos in my time. They are sticky, crunchy, beautifully sweet and juicy all at the same time – the meat would fall off the bone if it wasn’t for the sticky sauce with just the right balance of exotic spice keeping it in place. Fingerlicking good!

“Damn the ribs smell good” read a text I received from Mr Chipsonnoisseur last night, and for a second I thought the beautiful aroma of Chinese five spice, soy and caramel had spread beyond the apartment…  Then I realised he was wandering home past Darling Harbour and, like every other time, was probably tempted to make a quick dash into Hurricanes for a juicy rack of ribs. Little did he know he was in for a treat at home…

The smoky smell of slow-grilled ribs from the two nearby American-style steakhouses carries over here with the Easterly long before lunchtime and it is impossible not to feel like ribs every time you walk past either of those places. So much so actually that I’ve had ribs three times in the last week. [Did I just say this out loud?]. It was for research and it has paid off!

Serves 2 and, according to Mr Chipconnoisseur, the meal is more accurately described as serving 1.7, they are so irresistibly good you just keep wanting more. To make the meal less meaty serve sticky ribs with this delicious red cabbage and mint slaw for a hint of acidity and freshness. 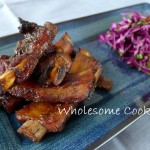 If you think one lot may not be enough, use double the ingredients. They can be easily reheated in an oven - covered with foil, or on a barbecue!
Servings: 2

For the Sticky Five-Spice Pork Ribs:

For the Red Cabbage Slaw:

To marinade the Ribs:

To make the Red Cabbage Slaw:

[…] Serve warm with rice or bread and lashings of gravy. Make sure to use all the crackling during the first serving as that’s when it is at its best. For salads, try the red cabbage and mint slaw. […]

The pork ribs taste very delicious. I did it slightly different. I chopped onion & garlic and finely with blender and smeared the mixture all over the rib and let it marinate in fridge overnight. It tastes delicious, the only disappointment is I forgotten to baste the rib as I roasting it. I should tried out this dish with my new purchased
basting brush.

They look delicious, I am just marinating them, so I will taste as well :) Beautiful photos.

Pyszna odsłona żeberek :)
Delicious, soft inside, crispy outside. For the next time I would add a little bit black pepper (I think it is in 5 spices but maybe not enough for me) or chili powder, just a tiny bit. But thank you Martyna very much for sharing this :)