These Polish-Italian potato, ricotta and onion ravioli are too good to pass by, especially if you love the cheese and onion flavour combo. Considering the only other living thing in the house at the moment is Mr Chipconnoisseur, it’s pretty easy to figure out whodunit… and I don’t blame him.

This particular recipe and method is a cultural melting pot: traditional Polish stuffing, wrapped in Chinese wonton pastry for ease of preparation (because yes, you can use wonton pastry for pierogies), shaped as Italian ravioli. Cooked then fried for extra flavour. Making me hungry as I “speak”.

If you prefer to make your own pierogi / ravioli dough, you can use the same simple recipe I used for my 5 ingredients blueberry dumplings. 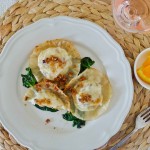 Makes 20, and needless to say, 20 we had. They store well in the fridge for a couple of days. Reheat by frying up. You need to season the suffing well as the spiciness will go away slightly with boiling. The focus here is on stuffing rather than the wrapping, so be generous! Omit bacon for a vegetarian / vegan versions.
Prep Time25 mins
Cook Time15 mins
Total Time40 mins
Servings: 20

For the Potato, Ricotta and Onion Ravioli [also known as Ruskie Pierogi]:

To make the Potato, Ricotta and Onion Ravioli [also known as Ruskie Pierogi]:

The obsession with fresh produce is taking our country by storm…

These look so delicious! I love pierogi.
Heidi xo

Thanks Heidi! Me too – just spent some time in Poland literally stuffing my face with pierogi!