What could be better than a no bake lemon cheesecake?! Fresh, zingy and deliciously creamy on an almond biscuit base. I think I’ve found my own “after dinner mint”. This may come to you as a surprise, but more often than not I’m dreading the question of what’s for dessert. Mainly because I’m not a big dinner eater and the thought of ingesting more food after what I consider a late meal already, makes me feel fuller than I already am.

But, I’m fortunate enough to live with at least one person who loves an “after dinner mint”, so recently I’ve embarked on a mission of satisfying the household’s after dinner sweet tooth despite my own inhibitions.

I needed something quick, relatively low in sugar – who needs that at 8 o’clock at night, and citrusy to cleanse the palate from the meal before. What could be better than a no bake lemon cheesecake?! And, unlike many ready-made desserts on the market, this one is pretty much additive-free.

Fresh, zingy and deliciously creamy on an almond biscuit base. I think I’ve found my own “after dinner mint”. 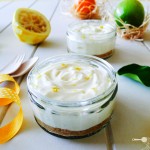 I used Tucker's Natural Vanilla crackers from their Dessert range because they are completely additive-free (and you can win some here) but feel free to substitute them for any wheaten or plain biscuits.
Prep Time10 mins
Chilling time30 mins
Total Time40 mins
Servings: 4 people

Brilliant!! I cannot wait to try this – you’re a star! It looks amazing…
Heidi xo

Thanks Heidi, I was inspired by your own lemony experiments :-)

I’ve never tried a no-bake cheesecake but your photos are gorgeous. They look so light and fresh, I definitely want to give this a go :)

Thanks Chanel, I am yet to try a baked cheesecake, just working up my courage!

I’ve bookmarked these!!! Might whip them up and take them into work for a birthday afternoon tea next week! they look so pretty in the jars too. xox

Yay! That sounds good, and yes, I love the idea of presentation in jars :-)

Beautiful cheesecakes :) I think they’d be the perfect dessert in summer or spring but still good in winter.

Thanks Gaby, I agree that they would be perfect for summer, but citrus fruits are in season so have to make the most of them!

Great presentation, and such an easy dessert.

Thanks Sara! It’s one of my new no-fuss favourites!

Normally not a fan of cheesecake because of how heavy and cloying they can be, but this one looks delicious and light! Definitely going to give it a go.

Those do look wonderful and I love desserts you don’t have to cook in the summer.

that looks awesome. it sorta looks like a lemon mergue.. or at least he one i bought for my bf.

How did you know I was looking for this exact recipe?? LOL I want to pipe it in the top of a strawberry. Wish me luck. :)

This looks so good and I’ve had dinner (and dessert) already!

Lovely recipe. I’ve saved it for later use! Thanks for sharing.

[…] Zesty no-bake lemon cheesecakes « Wholesome Cook Zesty no-bake lemon cheesecakes. Posted on 17/06/2011 by Wholesome Cook. 11. This may come to you as a surprise, but more often than not I'm dreading the question of what's for dessert Mainly because I'm not a big dinner eater and the thought of Cheesecake mixture: place cream cheese in a large bowl, add lemon juice and zest. Whisk until the mixture is combined. In another bowl combine fresh cream and icing sugar and whip until soft peaks form – do not overbeat, […]

Sounds very light and refreshing, the prefect way to finish a meal without feeling like you’ve overindulged.

Indeed, and the great thing is that you can always halve the portions further my preparing the cheesecakes in smaller ramekins or jars.

We love anything lemon around here and your cheesecakes look perfect. Light and refreshing and such a beautiful presentation! Thanks for sharing your recipe!

Am keen to give your vanilla biscuits a crack They would make the already perfect recipe even better!

[…] Vegan; Vegetarian; Recipe development + photo services; Produce I Love Foodie … What could be better than a no-bake lemon cheesecake?! And, unlike many ready-made… Link to original text […]