These Northern Chinese lamb dumplings or dim sum are traditionally made for Lunar New Year. Steamed to release the yummy broth, then lightly fried they are absolutely irresistible and go down a treat.

Traditionally, these lamb dumplings are made by whole families on Chinese for Lunar New Year and eaten just after midnight. In Chinese culture, dumplings signify wealth so many consider them a lucky food for the festivities. In the Northern provinces, they are eaten all year round, hence why their name is attributed to that region.

The most common stuffing in Chinese dumplings would have to be pork. A mixture of pork and prawn popular in dim sum. However, lamb used in the North can be a delicious and moreish alternative. A mixture of cumin, coriander and black pepper adds depth and warmth to the flavour of the filling. They are truly delicious.

For ease of preparation, use store-bought wonton wrappers. The pastry comes ready-rolled and is easy to work with. Most grocers nowadays stock them. Or you can choose to make your own using this dough recipe.

You can use regular cabbage, shredded finely, but wombok (or Chinese cabbage) is more of an authentic choice for the filling. Use any leftover to make a tasty slaw.

I love how these Chinese lamb dumplings are a communal affair. We, too, think that making a batch of these dumplings is a nice way to spend some family time any day of the year.

Now I am not the biggest fan of lamb so when I say these are super tasty, it means they really are.

If you prefer a gluten-free lamb dumpling and dim sum, I have provided such dumpling skin recipe in The Wholesome Cook cookbook. 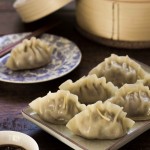 For the Northern Chinese Lamb Dumplings:

Love love love dumplings. I must admit I am not a fan of lamb, but I know my boys would love these. They look fantastic and would happily whip these up using pork or veal (or combination of both).

Your dumplings are really a work of art! And the colors of the minced lamb.. the plates you’ve used.. Excellent photography! And a fantastic recipe as well:)

These look so yummy, l love dumplings :) hope you are well.

Martyna, these dumplings look so perfect! I never manage mine so neat and beautiful.
Lamb is not a very frequent meat in Chinese cookery books nor in restaurants, but I have already heard about the Northern regions cooking it. Thanks for the inspiration.

I need to make these. They look great and ground lamb keeps going on sale!

They look so pretty! And I kinda like lamb, so I bet I’d love these.

Do you have any left over? I love any kind of dumplings. I’ve never had lamb ones. I tried making my own pork and prawn dumplings once and they worked out wonderfully, but I now have a great appreciation at how long each morsel takes to create!

Unfortunately, they are all gone. And yes, they do take a while to make but many hands make light work. Employ your friends or family to help :-)

I adore dumplings and these certainly sound fantastic. Lamb is a great variation here.

What a fabulous variation – I have made dumplings before but never with lamb. Must try these one day!

i love the use of lamb. i know i’d love these! fabulous change from the everyday pork or shrimp mince.

excellent use of lamb over the same old pork and shrimp mince! i’ll have to try this!

when does one cook the lamb. You never say that

The lamb cooks while you cook / steam the duplings. You don;t pre-cook it. I hope that helps.

Just look at those dumplings. I honestly think they’re calling my name right about now lol. So delish! Gotta save this

Thanks for your write up Northern Chinese lamb dumplings (é¥ºå­) Wholesome Cook. I haven’t looked at this before. It is often a wonder what you are able find out online.

[…] The other thing we made were some lamb dumplings. […]

I want ot make these for a new year’s party. Will these reheat? If so, how would you reheat them?

Hi Kim,
Yes, you can reheat them again my steaming in batches for 2-3 minutes. Enjoy! and Happy New Year!

[…] the thick brown sauces and liberal amounts of shrimp common to Cantonese cuisine, I preferred the lamb dumplings (饺子) and peanut-y dandan noodles (擔擔麵) of Northern Chinese cuisine. While he wanted to […]

[…] took inspiration from a recipe by wholesome cook and altered it to fit our usual dumpling making process. We really liked the simplicity of her […]

Loved this recipe. The dumplings were very tasty!