Autumn. Just the other day Laura came over for an afternoon puppy play date. I made a mish mash salad for lunch and she brought the most delicious cinnamon-poached pears for dessert. This gave me an idea.

I was going to roast some chestnuts and combine them with some Autumn fruits into a raw fruit salad, savoury for the best part, but then I remembered the amazing combination of chestnuts and fresh cream from the Mont Blanc and it all made much better sense. The fruits, pears and plums were luscious and the tartness of the plums was beautifully balanced by the sweetness of the chestnut cream. Very moreish indeed. 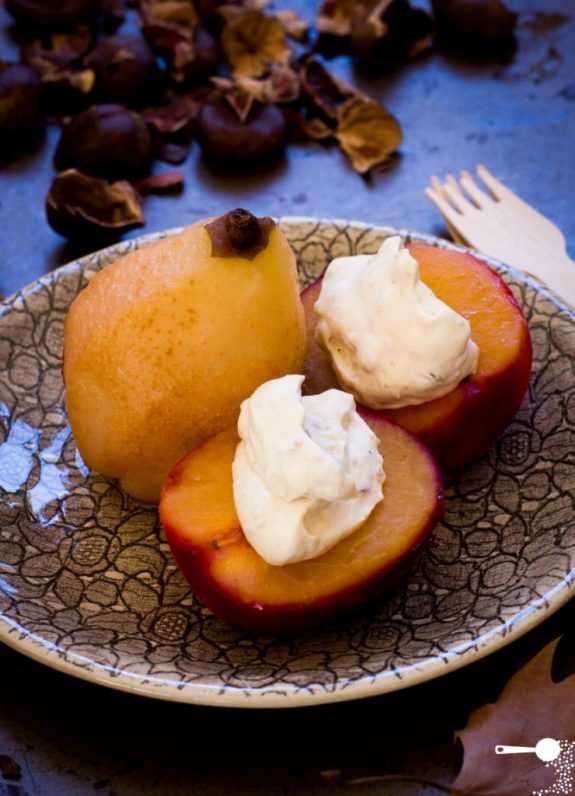 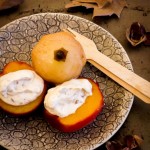 I used Red D'Anjou pears but William or Buerre Bosc pears would be just as good. You could use canned chestnut puree for this instead of freshly roasted chestnuts, but if you do, omit the honey from the recipe - most purees are already sweetened.
Servings: 2

For the poached fruits:

For the chestnut cream:

To poach the fruits:

To make the chestnut cream:

Marty, omg … you are so fast. I haven’t even blogged mine and here are yours. these look delightful.

Thanks Laura, I hope I haven’t upset Beauy about dislosin his age publicly ;-)

Not at all my dear, he is proud of his age!

What beautiful pictures! Makes me wish I could skip summer. Although soon enough the weather will make me feel that way too. Love the recipe too.

I love that you are heading into fall, right? The pears, the way they look after poaching.. I’d love to try this one for sure!

Wonderful photography. That chestnut cream must have a fantastic flavour.

Thank you, yes it’s one of those sweet creamy lightly nutty flavours that is like nothing else in the world.

Lol, that reminds me of my pup being introduced to my 7 yr old Lab – like putting a kid with ADD together with a crotchety old lady.
This recipe looks great, I’ll definitely be giving it a try!

Delicious! And it still throws me off the difference in seasons. :)

My goodness… you are really genius! I love everything about this dessert. I’d love to taste your chestnut cream. Such an elegant dessert! Even though I’m enjoying this warm weather, in my heart I slightly miss autumn food and weather. :-)

These pears sound fantastic. Chestnut addition is so creative and obvious at the same time. A perfect autumn combination. I wouldn’t mind it now, in spring either ;-)

These are gorgeous! I made a chestnut cream of sorts today, paired with delicious figs. Loving chestnuts at the moment!

Happy Fall to you and actually I am very jealous as this is my favorite time of the year and autumn dishes like yours really hit the spot. I love the idea of the chestnut puree cream so fancy!

Love this dessert! Specially that cream on top which enhances the flavours of the fruit

I just saw this on RecipeNewZ. This recipe looks wonderful. I actually have some pears and I did not know what to do with them. Now I do :-). Thanks for sharing!