As Featured in the May June 2014 Issue of Nourish Magazine: These 5 Ingredient Coconut and Edamame Samosas are a healthy and tasty alternative to the traditional samosas. Inspired by a visit to Yullis, my version is made with rice syrup and baked until crisp under the oven grill. Perfect for an afternoon snack, an out-of-the-ordinary starter or even dessert! Last Friday night I managed to venture out into the big smoke to attend a vegetarian dinner organized by Megan as part of the Meat Free Week. Venue of choice was Yulli’s in Surry Hillls, a funky cafe come bar come restaurant for plant-based food lovers. While the seats at the establishment are not the most comfy bottom rests in the world, the food is innovative, flavourful and all vegetarian. In fact they have a full separate vegan menu and an extensive gluten-free menu as well!

We chose to order the banquet menu to allow ourselves a wider tasting opportunity (you can read more about our experience thanks to Megan here). There were many of “oohs” and “aahs” exclaimed as the food began to arrive, none least for the Edamame and Coconut Money Bags. Although I found the originals a smidgen too sweet, I liked the idea of the filling and thought they’d be a perfect snacky-snack to make at home. Since I am yet to discover what that edible “string” is, used to tie them up into place, I decided to practice my samosa skills instead.

I laid off the deep fryer too, in place of the oven grill which crisped up the pastry skins. A few of the samosa triangles burst at the seams, but that only made for a more rustic appeal. A great healthy snack for a lazy weekend, really. So moody and rustic. 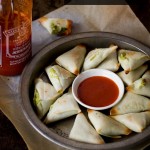 These 5 Ingredient Coconut and Edamame Samosas are a healthy and tasty alternative to the traditional pastry triangles. Inspired by a visit to Yullis, my version is made with rice syrup and baked until crisp under the oven grill. Perfect for an afternoon snack, an out-of-the-ordinary entree or even dessert (use a little lime juice instead of chilli sauce)! Makes 14 samosas.
Prep Time20 mins
Cook Time10 mins
Total Time30 mins
Servings: 4

Voted and I’m still thinking of meat-free but haven’t quite made the hop.

Thank you Maureen! I have actually found it not to hard to go vego for a week. One thing I missed was fish though…

Impressive that you went home and recreated these (I’m just thinking of going back to Yullis to have them again).

They are actually pretty easy to make, very yummy and filling too. I’m thinking of going back for the pizza and eggplant which I didn’t get to try (someone pounced on it before I got a chance LOL).

Nice use of edamame, I think I can make some of these tomorrow I got everything apart from the wrappers. Nice recipe Martyna

Yum! love this fast and quick appetizer recipe. Nice to have this one as I usually have all 4 of those items in my freezer. Voted! Take care, BAM

I loved the coconut and edamame money bags at Yulli’s! Your samosa version looks amazing :D

Thank you Swah, I decided to recreate them because they were so out of the ordinary! :-) and yummy indeed.

I can’t wait to try making these!! My husband and I went to Yulli’s for the first time at the weekend and both absolutely loved the money bags. He really wanted to make them at home but I wasn’t too keen on the deep frying, so I was so happy to stumble across your recipe – thanks so much for sharing :)