These French Waffles are delectably crunchy on the outside and fluffy in the middle. Easy to whip up, they are dairy-free – simply serve them with fruit or a dusting of icing sugar. If not allergic to dairy then the traditional topping of fruit or jam and cream might tickle your fancy. For a more festive version serve with this Cointreau whipped cream an chocolate shavings. When I first drafted this post it started with “Greetings from Poland, where many of my childhood food memories are still truly alive and well!”

After three weeks away that had us exploring seasonal food of France, Spain and Poland, I realised just how many traditional Polish street foods I’ve been missing. Fresh sunflower kernels and walnuts for one. A few other savouries and many sweet treats like these crunchy on the outside, fluffy in the middle French-style waffles or gaufres. Gofry in Polish. Unfortunately somewhere between accidentally leaving my laptop behind in Spain while nursing a bad bout of tonsillitis, and having no time and little internet access on the last leg of our trip, the draft never quite made it into the world. Until now, with us back in Sydney! I must have mentioned some of these cravings to Mum, because she ended getting me a small waffle iron as a gift, so sweet! I didn’t waste much time before the first batch of lattice-patterned treats was ready to devour.

Traditionally, in Poland and France for that matter, they are served with a dusting of icing sugar or whipped cream and jam – Anathoth’s rhubarb and berry variety would work really well, or fresh fruit. To lend an Aussie twist to my recipe I used Brookfarm’s Lemon Myrtle Macadamia Oil instead of butter for the batter, and for a grown up version I whipped up some cream with Cointreau. A grating or LovingEarth’s Orange and Gubinge Chocolate completed the citrusy waffle indulgence. 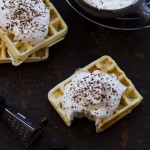 The following recipe is very versatile. You can make it dairy-free or nut-free. You can also add fresh blueberries to the batter or for a more indulgent treat, some chocolate chips! Makes 8-10 waffles, depending on the size of your waffle iron.
Prep Time15 mins
Cook Time15 mins
Total Time30 mins
Servings: 6 -8

For the French Waffles:

For the Cointreau Whipped Cream:

To make the Waffles:

To make the Cointreau Cream:

Oh these look fantastic! I can’t wait to give these a try.

Oh no – sounds like we are having pretty similar experiences between sickness on holiday to craving food from home – I’ll make sure to keep a close eye on my laptop! Glad you are home safe, the waffles sound lovely :)

Thanks JJ, I’m home safely – as is my laptop from which I am now typing, thank goodness, and watching your own travel and food adventures on Instagram! Sounds like a great trip. Surely there must be chicken and waffles somewhere nearby?

Thanks! They are quickly becoming our weekend afternoon tea staple!

There is something so delicious about eating oddly shaped foods. The square holes are just begging to be filled with toppings. Ahh waffles…