Strained or Hung Yoghurt Cream Cheese is made using natural Greek yoghurt, a muslin cloth and a little waiting time. It can be served as a savoury spiced Labneh, Shrikhand with sweet toppings, used in baking, cooking or eaten fresh. Since most of the whey is strained away, it can be enjoyed by people who are mildly lactose intolerant. What is Strained Yoghurt Cream Cheese?

Unlike cream cheese, yoghurt cheese is high in gut beneficial bacteria, is creamy without the excess fat and since most of the whey is strained away, it can be enjoyed by people who are mildly lactose intolerant. I first discovered Labneh – balls of strained yoghurt preserved in herb-infused oil about 3 years ago. It became an instant infatuation.

I quickly decided to make my own because, firstly, it was cheaper and because I could preserve mine in pure olive oil instead of “vegetable” oil blends that the more expensive stuff from the deli came swimming in. The secret of this recipe lies in the quality of the yoghurt used.

I absolutely adore Farmer’s Union Greek-style yoghurt. It’s thick and creamy already without any thickeners (gelatine, gums) or additives frequently used in  a few of the other brands, plus it is beautifully tart. After making strained yoghurt cream cheese a handful of times, I realised just how very versatile the cheese was and how easily it could form a base for many dishes, both sweet and savoury. Nowadays I keep a serving on hand most of the time.

7 of my favourite ways to use Hung Yoghurt Cheese

1. Make Middle Eastern Labneh and preserve it in quality olive oil and your favourite blend of spices and herbs. It will last for months, but I bet it will be all gone not before long. Spread it on bread, use to top salads, add some to mash.

2. Because of the lower water content than yoghurt itself, it can be used as an addition to sauces without splitting, so it is a fantastic for soups and curries.

3. It makes for a creamier, richer base for dips such as the Greek tzatziki, Lebanese garlic sauce or Turkish haydari which is similar to tzatziki but does not include cucumber. My most recent favourite is salmon and yoghurt cream cheese dip – you can use this yoghurt dip version as a base. I’m also thinking of making a smoked mackerel version!

4. Use it in frostings and icings instead of cream cheese – less fat and a great dose of healthy cultures in each serve.

6. We use it as topping for nachos and tacos instead of sour cream, crumble it into for salads and or enjoy spread fresh on Ryvita crispbread topped with smoked salmon, tomato or tuna.

7. Make Indian Shrikhand (recipe below), which is a sweet strained yoghurt dish that incorporates sugar – I prefer to use honey or rice syrup, nuts and fruit. It’s refreshing and often enjoyed instead of ice cream. You can obviously go all out in terms of the seeds, nuts and spices. Follow this recipe to make the Strained (Hung) Yoghurt Cream Cheese, without the garlic and herbs, then use it to make this delicious dessert. 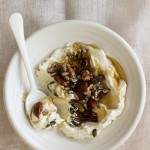 Shrikhand is a popular Indian dessert made from yoghurt, sugar and nuts. It can be enjoyed during warmer weather in place of ice cream. Make it your own by adding your favourite nuts and seeds, dried fruit if you wish, and a drizzle of honey or rice syrup.
Prep Time5 mins
Total Time5 mins
Servings: 2 people

Just saw this on Pinterest and had to read. Love yogurt and cream cheese but knowing that the latter can be made more healthy is great. *drool* just looking at the dessert to. Pinning and trying today!

Wow! So easy and I’ve been enjoying that yogurt from your recommendation in the cheesecake post. Now this? Amazing! Thank you!

Where do you get cheesecloth from?

You can get it from many large kitchenware stores, but to be honest I often just pop down to the local pharmacy and buy large sheets of gauze bandage (rectangular, square or even traingles). They come in sterile packets so are safe to use with food. Easy and convenient, and to be honest, much cheaper too! I wash mine out in warm soapy water after use too and let it dry for re-using.

Great Post Martyna! I want to try this as well and thanks loads for all the diverse ways that it can be used. Have a super week. Take care, BAM

Ah, you and your cheese making! You always make me so jealous that I don’t do it more often. This looks wonderful.

Thanks Amanda. I live with a cheese connoisseur so cheeses are ALWAYS on the agenda at our place.

[…] on the lamb. The “white stuff” being the garlic and paprika labne – a Middle Eastern strained yoghurt cheese. Creamy perfection, so I’ve adjusted the recipe accordingly. Finally, a grate of fresh lemon […]

What a simple recipe but has so many uses. Thanks for the yogurt recommendation too. Do you know if it is free range / organic?

Hi Joe, I have spoken to Farmers Union representative and they have confirmed that the yoghurt uses milk from pasture-raised cows (free-range). Feed is mostly fresh grass, but is adjusted seasonally and supplemented with hay and some grains.The farmers who produce the milk for the yoghurt are also required to follow the dairy industry’s regulations on best practice. It is produced in Morwell, Victoria and has been crowned the Champion Natural Yoghurt of 2014.

Dear Martyna, I made this cheese on the weekend to use in your smoked salmon dip. It was fabulous. SO light and and tangy. Everyone loved it and wanted the recipe. Best of all one of my lactose intolerant friends tried it and she was fine. Thank you for sharing this. I won;t be buying cream cheese again.

[…] and Fennel: love this one!  Drain 1 (195g) can tuna in pure olive oil then mix with 1/2 cup homemade yoghurt cream cheese and a tablespoon of freshly chopped parsly. Season with pepper. Serve with shaved […]

Might seem like a stupid question but can I use readymade Shrikhand as a substitute of cream cheese to make a cheesecake?

Thank you for your time!

Hi Carol, I cannot see why not. As long as it’s not too intensely spiced or sweetened, it should be fine. Let me know how it goes?

[…] and sugar. Most store bought cheeses contain additives, some even colours and preservatives. Make your own cream cheese using Greek-style yoghurt. Add it to dips, use in cheesecakes and spread on your […]

Oh no- I just tried this, and the result looked amazing but tasted like mould! There was mildew forming on the cloth when I retrieved the cheese after 24 hrs. I live in a warm climate (Barcelona) where it’s 24 c + right now- could that be the issue? Have you heard of this happening before?

Hi Bianca, did you keep the yoghurt in the fridge while hanging in a cheesecloth? It must be refrigerated otherwise bacteria and mould can form. It’s also important to make sure the cloth you used is sterile (that’s why I like gauze dressing sheets from the pharmacy). And the use by date of yoghurt is one to watch too.

Hi, I currently make my own yoghurt using a Luvelo yoghurt maker. I am interested in making cheese from this yoghurt but see that you use a very think textured yoghurt. Have you tried making the cheese with a less firm yoghurt? I am just curious as to whether it would work.

Hi Pip,
I used Greek-style yoghurt which indeed is a little thicker because it’s partially strained, but I am sure the same method would work with your yoghurt – you might just have to leave it to strain a little longer. Make sure you do that in the fridge (not on the bench top). Let me know how you go!

Hello Martyna
I’m very pleased to discover your website. I’m looking to make a cream cheese for a cheesecake receipe and this looks great.
When the Yogurt is straining – where is the best place to keep it?
Does it need to be in the fridge while its straining so it doesn’t go off?
Many thanks
Jhanny

[…] centre, but you can skip this step if you wish. Since we are fine with dairy I used fresh cream and yoghurt cream cheese to add a little probiotic goodness and balance out the fat content somewhat. For a dairy-free […]

[…] Line a sieve with the cheesecloth and strain the mixture into the cloth. Add flavoured salt and herbs, if using. Gather the edges and hang to strain over a bowl, in the fridge, for 6-12 hours (similar to this method here). […]

[…] cheese is one of my favourite kinds of soft cheese. It’s delicious and it’s super versatile. You can use it for sweet or savoury things, and you can work it into just about every meal to add […]

Hi, I make yogurt from regular milk in my GoWise 8 qt pressure cooker. I had no idea that after I have drained the yogurt the way I already do that it works as cream cheese! I will have to try it as a substitute. Thanks!