Move over Quinoa, there’s a new kid on the gluten-free grain block and it’s called Teff. Teff is an ancient whole grain native to Ethiopia and like other grains it can be used as a porridge base or ground into flour. Now available in Australia. I’ve been using teff flour – the most commonly available form of teff in Australia, for a lot of my gluten-free recipe testing recently (I hope to be sharing more about that very soon) and absolutely love how it can be substituted in an almost one-to-one ratio for wholegrain gluten flours.

Whole teff used to be a little harder to come by, but a week ago when restocking my dwindling supply of rice malt syrup, I happened to find it in the health food aisle of my local Coles under their own brand. Reasonably priced, too (some teff flours out there can be prohibitively expensive, so this is a bonus) – a little goes a long way. The grains come from the US and South Africa. The great thing about keeping your teff as a whole grain in the pantry is that you can mill only as much as you need at a time using a power blender, Thermie or a good old-fashioned coffee grinder – flours have a tendency to spoil more quickly, especially in humid conditions and if not kept completely air-tight. In its motherland, teff flour has been used for centuries to make a fermented pancake-style bread called Injera – there is a simplified recipe on the packet as well, and you could borrow this traditional idea to make gluten-free pancakes or waffles, but like other grains, it can also be used whole to make porridge or, once toasted, add crunch to salads. Aside from being gluten-free, making it an ideal porridge grain option for coeliacs and those with gluten and wheat sensitivities, teff is higher in protein than wheat, it’s high in iron, calcium and amino acids. It has a pleasantly sweet nutty flavour and the seeds are the tiniest you’ve ever seen which also means you can easily turn the porridge into grits or polenta-like base for savoury dishes – saucy meat or vegetable curry numbers in particular. 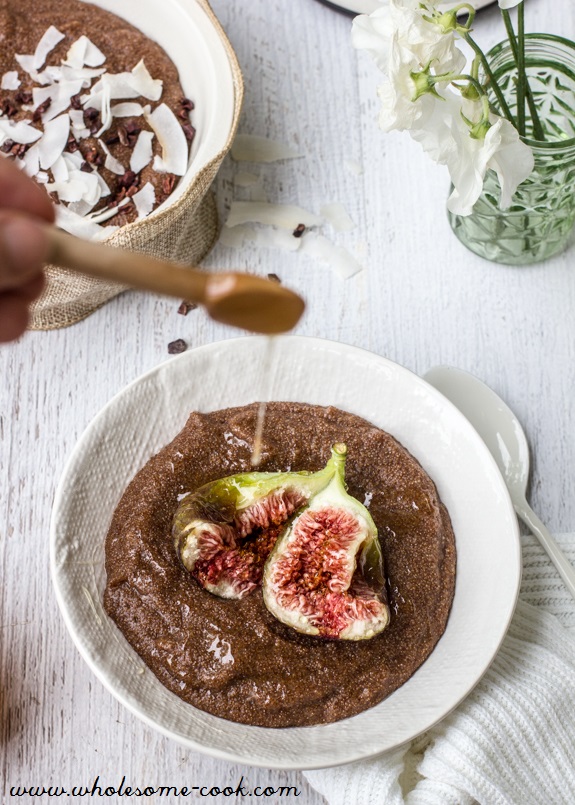 The following recipe contains the basic instructions on how to cook teff to a porridge consistency and suggestions for serving the porridge two ways. Since it is naturally such a rich brown colour, I thought a chocolate version was definitely a given.  Since figs are in season, I could not say no to a figgy version, but any seasonal fruit or frozen if need be would also work here: bananas, dates, papaya, blueberries… The initial amount of water is perfect if you’re planning to serve teff more as a base for savoury dishes, instead of pasta, mash, rice or other grains. Stir in up to 2 cups of water or milk of your choice to cooked teff to achieve the porridge consistency you like. 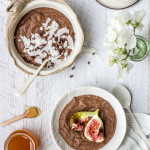 The initial amount of water is perfect if you’re planning to serve teff more as a base for savoury dishes, instead of pasta, mash, rice or other grains. Stir in up to 2 cups of water or milk of your choice to cooked teff to achieve the porridge consistency you like. Embellish with other fresh or frozen fruit of your choice when figs are out of season.
Prep Time5 mins
Cook Time15 mins
Total Time20 mins
Servings: 2

For the Teff Porridge Base:

For the Coconutty Chocolate Version:

For the Figgy (Fruit) Version:

To make the Teff Porridge Base:

To make the Coconutty Chocolate Version:

To make the Figgy (Fruit) Version:

I am a big fan of teff in baking so I was only happy to create this recipe and share it with you as part of the Nuffnang and Coles Teff campaign.

Oh my! Those look incredible! Love the chocolate version – thank you for sharing, I’ve never heard of teff before.

That looks amazing! your photos are gorgeous. I always appreciate learning about new ingredients! Can’t wait to try it out myself!

Do you have any recipes for porridge using teff flour insted of whole teff grains?:)

Hi Erica, I do not, but you can experiment with blending 1/4 cup teff flour with around 1 cup milk of your choice or water, whisking then bringing to a simmer while stirring. Serve with peanut butter, cacao, fruit.

I have purchased some Teff instant porridge sachets … I’m wondering if it upset my diverticulitis issue ??

Hi Dina, it is possible it could have. Like all other seeds and grains, teff does contain small amounts of lectins and could potentially be upsetting for some people…