I’m not sure about you, but we have just about finished eating our way through the Christmas ham. The 24 hours before Christmas was the most agonising as we wondered if the stock-standard oven result would be a better and a more predictable than trying to BBQ the ham.

Finally, a couple of hours before Christmas lunch and with the oven pre-heating, we thought why not try the bbq!

Well, let me tell you that I am so glad we went with that method – this was the best ham I’ve ever had. We glazed it using a sticky maple glaze. I’ve included a little mini recipe here for how to cook a ham on a bbq so that you don’t have to agonise over it like we did.

Matt did a wonderful job glazing and barbecuing the ham. Our glaze was simple and we skipped the clove-studding because the flavour can be quite strong. It turned out perfectly. The fat rendered around and into the ham and the glaze caramelised and seeped into the crevices and outer layer of the meat.

In our attempt to finish it all before summer’s end, I’ve portioned off bits; freezing the fatty pieces for melting and cooking eggs in, dicing smaller bits and freezing those to add to scrambles, soups and quiches and freezing the hock that will go into a lentil soup during winter.

Yesterday I diced up the last of the misshaped ham slices that tend to be so when close to the bone, rendered the fattier bits and made a delicious fried rice with the ham as the base.

Don’t get me wrong, most other hams will do, too it’s just that most Christmas hams still need using up somehow long after Boxing Day is over. 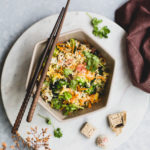 Bacon fat can be used instead of ham fat. While I used leftover Christmas ham in this recipe, any diced ham would do. Also, I used leftover steamed rice – cooled leftover rice is best for this dish as it won’t get mushy when added to the pan. You can use microwave steamed rice if you like, without heating.
Prep Time5 mins
Cook Time10 mins
Total Time15 mins
Servings: 1 person

I now have your cookbook and am starting to use your great recipes! Ngaire

I swear leftover recipes are better than the original dished they’re made out of. Well, at least that’s the case here! Looks SO good!

I certainly agree that there are bbq leftovers after the holidays and heating them into the oven is a common way to consume these. Good thing there’s this nice, hearty and delicious recipe to try. Thanks for sharing. This is such great meal to start the year.