The idea for the Panzanella (Italian bread and tomato) salad came after I’d eaten a small tub of chilli and chives marinated Persian feta and was going to use the oil with feta crumbs for our salad dressing. Then I thought, why not baste bread slices in the feta oil and grill them till slightly crusty and serve those with the salad instead. You know the times when you go to a restaurant and are smitten by the entree, only to get to the main and leave totally disappointed? Well, that was dinner date at our place last night…

Anyway, following this delicious Panzanella salad starter which Mr Chipconnoisseur described as “that was as good as you’d find in a top notch restaurant, mmm”, I served what could only be described as a disaster. It was meant to be a beef schnitzel, but texturally, it resembled something closer to a sole of a Dunlop Volley. Not that I’ve ever eaten one, but it’s what I’d imagine it to taste like. It was so overcooked and dry that I think one of the pieces which I accidently swallowed without much chewing, cut open my throat. Short of calling an ambulance, I apologised to my dinner date for the life-threatening state of the main and blamed it, not on the lack of my culinary prowess, because normally I am quite good, but on Brad Pitt as it was his movie, Moneyball, which we were watching that caused the schnitzels to overcook. Not happy, Brad!

I’m not sure if my excuse worked, or was appropriate, but the lemon delicious puddings for dessert sure helped brighten up the mood. And as for the salad, it is one of the most wonderful dishes I’ve had in a while and I will be sure to make it again. Perhaps as the main next time to avoid any more dinner date disappointments. 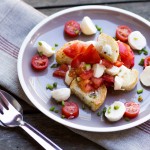 Oil with Persian feta crumbs may sound like a confusing ingredient, but it is simply the oil leftover from marinated Persian feta. Keep it to dress salads or smear over breadrolls before toasting. The oil will impart a wonderful flavour into the bread.
Prep Time10 mins
Cook Time3 mins
Total Time13 mins
Servings: 2

For the Panzanella Salad:

To make the bread:

Beautiful, healthy, delicious! Thanks for sharing!

I totally concur with your sentiments regarding entrees vs mains. I nearly always wish that I had just ordered two entrees. Mains always seem boring and safe, whereas with entrees, chef’s are not bound by some need to provide meat and vegetables.

This looks like it would make an excellent lunch too. Yum!

I often do that! You are right – they do get more adventurous and 2 entrees is generally just the right amount of food too, you know, to leave room for dessert without feeling guilty!

I can see how disappointment might follow that, it looks majestic. I adore panzanella and yours looks top-notch.

You have set the bar so high on your standards for food excellence that Mr Chipconnoisseur is spoiled. I am sure that your main course was fine. Maybe he was sore with you as his entire meal was not photographed so he felt it was somehow not up to your usual parameter. LOL Bread salad looks divine.

If anyone was sore it was me and my throat… he was actually very kind and kept saying the schnitzel was ok, but I knew it wasn’t. Haha

LOL- Hats off to Mr Chipconnoisseur for hanging in there.

My husband says the same thing when I cook something that’s really crap. He’s all, “it’s good, honey, honestly.” Then 3 days later the truth comes out. :)

On weeknights I know the truth straight away if following the question of, would you like the leftovers for lunch, there’s no pause… although Chippy is a little fussy sometimes. PS he just had this salad for supper tonight!

That is a stunning salad!

Simple and fantastic. Katherine’s been wanting me to make something like this for ages.

Hee, hee. I was so excited by the recipe, I skipped over the disaster and had to go back. We’ve all been there!

This is truly one of the most beautiful salads that I have seen and what a wonderful idea using the olive oil the grill the bread. Congratulations because no one else can claim the title of “wholesome cook” like you do.

Oh thank you! That’s so kind of you to say *blush*

Love me a Panzanella salad (and, ahem, Brad Pitt). I can understand why you may have been a tad distracted. It’s a lesson for us all. ;)

That is a brilliant idea!!! I have to say, why didn’t I think of that before?