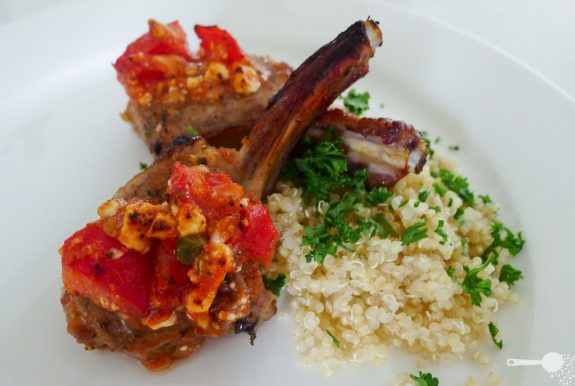 Nothing makes me more happy than seeing little people polish off their dinner not long after it’s been served. “These are deeee-licious” was the comment as they munched on these juicy grilled lamb cutlets with a fresh tomato, feta and caper sauce.

I was a little apprehensive about using capers and feta in a kids meal because of their strong taste, but there were no protests from my little kitchen assistant as we crumbled the cheese  and added some little baby capers and juice into the marinade.

I think that’s the great thing about getting kids involved in the process of cooking – they learn about different ingredients, taste them on their own and get a whole lot more excited about eating the final product, because they made it. And as for me, I get great enjoyment and satisfaction from the fact they are keen to try new things and are now asking to have a garden salad with a meal. Plus, I don’t mind the extra pair of hands in the kitchen.

While she mixed and marinated with utter delight, I got onto the quinoa [keen-wa] – an ancient South American protein-rich superfood that’s similar to cous cous but has a more nutty flavour and a slightly more crunchy texture. It cooks quickly and can be eaten in salads, with milk as a breakfast cereal and used as a potato / rice substitute. Best of all quinoa is wheat and gluten free so it’s great for people with those allergies.

Place quinoa in a sieve and rinse thoroughly under lukewarm running water to remove the outer film (otherwise it turns bitter). Place in a saucepan with 1 cup of water, bring to the boil and simmer for about 15 minutes, mixing occassionally, until the grains become translucent and the water has been absorbed.

In the meantime, combine tomato paste, chopped tomatoes, capers, herbs and olive oil in a large mixing bowl. Crumble in feta and add the lamb chops. Mix to coat.

Arrange lamb cutlets in a shallow roasting tin and grill for about 5 minutes on each side. Turn off the oven and allow to rest as you add the finishing touches to the quinoa.

To serve, mix quinoa with the parsley and arrange lamb cutlets on top. Drizzle with the sauce from the roasting pan.

Pork roast with prunes and walnuts

Fantastic recipe! I like the idea of using quinoa with the lamb cutlets, although I have to admit I have trouble finding it in Sydney. The combination of fetta and capers is quite flavorsome. I’ll try this recipe next week. :)