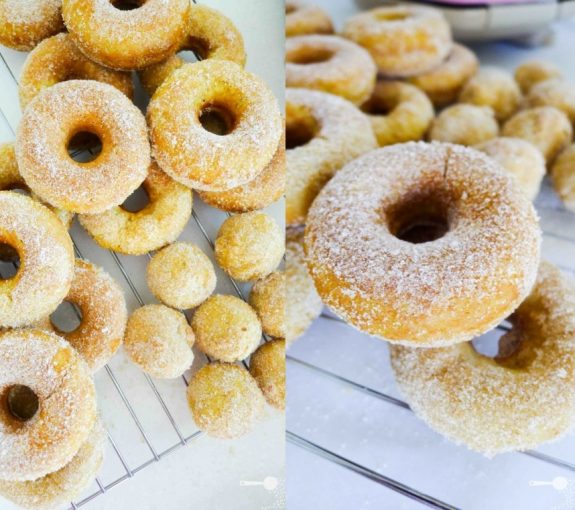 Catering for a large crowd, as I am doing tomorrow, is generally risky business because you are more likely to come across people with allergies, or those who abstain from certain foods. But at the same time, it is also a great opportunity to cook your heart out and make all those things you have always wanted to but you didn’t because the yield was too high and you were scared of eating it all by yourself.

Cinnamon donuts are definitely in this tempting but dangerous category for me and for Mr Chipconnoisseur, who often complains there is no place in the CBD that sells hot off the press donuts.

So when it came to making hot cinnamon donuts – Mr Chipconnoisseur’s favourites, and in my effort to satisfy everyone I decided to make them tripply good. Hot. Baked. Vegan and, only by accident pretty much fat free securing the following recipe a hattrick plus one in the goodness stakes.

I have found the perfect solution in the this recipe from a mostly vegan blog, Oh She Glows, and since I was unable to find a donut baking tray at one day’s notice, I spent my $40 Myer gift voucher on the Sunbeam ‘Sprinkles’ doughnut iron. Before you start turning up your noses at both choices, please hear me out. I know the recipe is vegan, but please do not let that discourage you. If anything, I have to say I have become intrigued by and strangely fond of many vegan recipes recently. Many of them, this one included, actually taste great and are often better for you. And they are so inventive, I love their own genius!

Secondly, while my juicer, meat mincer and a couple of other must have gadgets are now collecting dust somewhere in the garage, I am certain I will be using ‘Sprinkles’ again and often. Easy to clean, it makes 5 perfect donuts in minutes at a time without excess fat. I’m sure the kids will love making and decorating some themselves and we will all enjoy eating them.  I’m already thinking of some savoury donuts we could make with grated carrot, zucchini and so forth.

The donut iron is not going back in the box, instead it will reside right next to the jaffle press, for easy access anytime. And I hope everyone enjoys the donuts tomorrow. Alongside a few other refreshments I made for the event.

Adapted from Oh She Glows. I accidentally omitted the fat (melted non-dairy spread) but the donuts were still delicious and had great texture. I also baked 12 donut holes in the oven using a small muffin tray just to see how they turn out in the oven. If you don’t like cinnamon, grate some citrus zest into the sugar and use that instead… Orange sugar donuts? Yum too. For Sunbeam Sprinkles donut iron: plug the unit into power and allow to heat up until the light turns green to ready. Spray with some cooking oil spray before cooking each batch.

To prepare the pumpkin: if using fresh pumpkin, cut pumpkin into smaller chunks to speed up the cooking process. Cook in a little water for 10-15 minutes or until tender. Drain and mash with a potato masher or puree with e stick blender.

To pipe the donuts: transfer the batter into a large zip-lock bag. Close the zip lock, releasing all the air and squeeze batter toward one of the bottom corners. Twist the empty end of the bag a couple of times and secure with a rubber band – voila, you have a nifty piping bag! Pipe into your moulds or into the bottom donut rounds in the iron.

For oven baked: bake for 10-12 minutes or until lightly golden and springing back to the touch. Remove from oven and cool in the tray for 5 minutes. Lift out of the tray and cool on a wire rack.

For Sunbeam Sprinkles donut iron: cook for 6-8 minutes or until lightly golden and springing back to the touch. Remove from iron and cool on a wire rack.

To dust with cinnamon: dip each donut into melted spread. Wipe excess fat with a paper towel and rub the same towel over the dry side of the donut. That should allow sufficient greasing for the cinnamon sugar to stick to. Transfer to your sugar bowl and toss around to cover.

Donuts will keep for 2-3 days in an airtight container. I saw this recipe & am dying for a donut iron!! Love it. Great work, lady. You’re truly kicking goals, fabulous post! …but great, now I want a delicious vegan baked donut & have none :P
Heidi xo

I even got further dicount of the RRP$44.95 because mine was floor stock – lucky last worked the treat for me!

Yum!!! I love cinnamon donuts!!! I love this vegan version too! Mmmm

I’ve been reading along for a while now. I just wanted to drop you a comment to say keep up the good work.

I worked at a bakery in high school and lost my ability to eat donuts, but oh if I could these would be the first one. Good luck at the event.

Thanks :-) it all went well and the donuts were a big hit. PS I worked at Donut King when I was in high school too, took me a long while to even get near a donut shop afterwards! These however are completely delicious and guilt free!

Love cinnamon donuts and love these even more that they are VEGAN. I remember seeing these on Angela’s blog too and now that I have seen them here, it confirms that I must make them. I was craving Donut King donuts last night, and here in Saudi, we don’t have anything like it, and I’d rather make them myself knowing what goes into them. Thanks for this, I’m bookmarking it for future :)

I was craving the exact same thing, Donut King, but decided to give these a go. Ate 3 last night without needing to feel guilty and they were a hit at the event today!

Oh my! I have such varied success with donut making – deep frying and I are not friends at all but a baked one (or ironed one) might actually work for me. Love the idea of a citrus sugar dressed donut too.

I am normally petrified of deep frying for a number of reasons: results tend to vary, they are generally greasy, the house smells of oil for ages and of course there is the risk of getting burnt! This is so much better!

So it worked and from the looks of it very well too!! I’ll have two to go please, can I, can I?? I was given an electric donut press by dear little brother and it did work but I am itching to try out artisan donuts in baking trays with yeast. Did you find that baking soda deflates them over time? I found mine lost a bit of oomph after a couple of hours when I used baking soda and held well with yeast.

They definitely hold much better with yeast (2-4 days), these were fine the next day. But frankly they wouldn’t have lasted much beyond that because one little boy here LOVES them eventhough he disliked pumpkin. Looking forward to seeing your yeast ones (my cousin used to make Polish yeast jam ones but they were fried…)

I just made these and they are DELICIOUS. I’m always so sad that I can’t enjoy those cinnamon-sugar mini-donuts at festivals since I’m vegan; this alternative is just as good, but slightly healthier! (I used whole wheat flour and a couple other small modifications (: )