With the introduction of Curious Cuts by Harris Farm, sourced from grass-fed Cape Grim beef and supermarkets following suit in the secondary cuts department, it is becoming cheaper to eat good meat. And let me tell you, this paprika and lime beef bavette tastes as good as the premium stuff. Here’s proof. When it comes to grass-fed beef, sustainability goes a step further nowadays with producers, grocers and supermarkets jumping on the secondary cuts bandwagon. When I was shooting beef cheeks for the The Wholesome Cook book, a mere 6 months ago, I was only able to pre-order beef cheeks from my local butcher’s and they came frozen. Now I’ve seen grass-fed beef cheeks, fresh, at the supermarket.

It’s a great thing because there is less waste and it promotes the kind of nose-to-tail eating that seems to have skipped a generation or two. With the introduction of secondary cuts everywhere including the cleverly named Curious Cuts range at Harris Farm, sourced from grass-fed Cape Grim beef, it is becoming cheaper to eat good meat and that’s a good thing for our health, too. You see, grass-fed beef is higher in Omega-3 and lower in the pro-inflammatory Omega-6 (I talk more about this and the all important ratio of the two in the Wholesome Kitchen chapter of The Wholesome Cook book).

Bavette (from French meaning bib) is an extension of the T-bone and Porterhouse steaks, flap meat is officially part of the short loin section. According to SFGate flank steak and skirt steak also would be lovely in this recipe but cooking times may vary – the recommendation, however, remains to cook to medium rare at most.

Being the first day of Spring, it was time to dust off the grill and have a little Spring-eve dinner of grilled Beef Bavette and Heirloom Tomato Salad. To be honest, it’s a great dish to treat your beef-eating dads to this Sunday (don’t forget, it’s Father’s Day). Since I’ve been obsessed with sheep’s milk feta, I added some for good measure and it went beautifully with the smoky paprika and lime beef. PS While I received ingredients for this dish from my local Harris Farm – Paul their lovely butcher delivered it to my door, I’m there almost everyday and love the selection of grass-fed and organic meats on offer. Not to mention the fruit and veg as well as the fact that the company donates plenty of food and ingredients to OzHarvest. 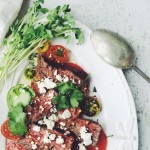 The following recipe has been adapted from Harris Farm Mexican Bavette recipe. Omit feta if you prefer. If you don't like your meat rare, slice the bavette once seared and cook slices for 10 seconds on each side before serving.
Prep Time30 mins
Cook Time15 mins
Total Time45 mins
Servings: 4 -6

This looks and sounds amazing Martyna. I love the idea of eating different cuts of meat. Thank you for sharing.

yuuum! so easy to make too and very pretty!

NOM! I am all over this! Perhaps it will be apart of my weekend menus! ;)