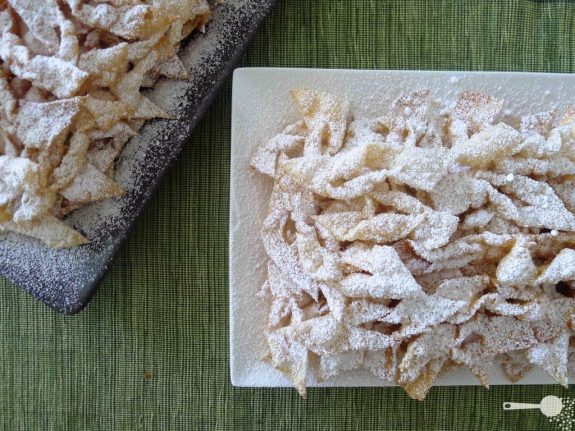 I think it’s pretty safe to say that the Italians can claim Crostoli as their own as much as the French ‘own’ the croissant. While they’re known by many names, depending on regional variances, Crostoli – a name from around Venice is the most recognized in the Western world perhaps because of the pastry’s traditional serving time during the city’s famed carnivale, held in the period between Christmas and lent.

Europe being Europe, has always meant that customs, traditions and of course recipes would travel across borders quickly and become entrenched in cultures much as if they were one’s own. And thus I’ve always considered my Mum’s Crostoli recipe traditionally Polish (we call them faworki or chrust, meaning favours / ribbons or twigs).

Now, I’m not sure of the exact meaning of the word crostoli, but between it and the Polish name chrust you can kind of “see” that the pastry itself is meant to be like little strips or twisted ribbons of delicate and flaky crust. Dusted with a little icing sugar it is great fun to make and an even greater fun to eat! Just try not to drop any crumbs or blow any sugar around…

You should prepare all the crostoli in advance of cooking as they only take seconds in the oil. 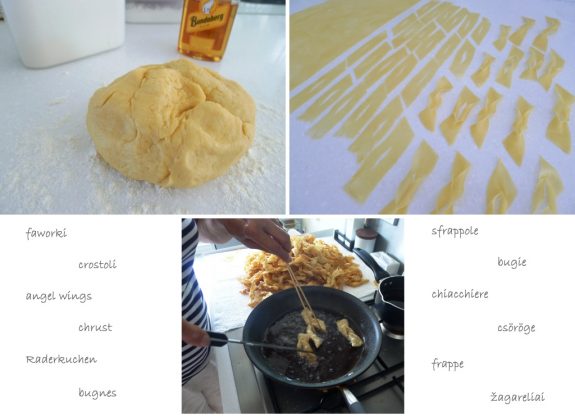 Mix all but the the last two ingredients in a large bowl to form a pliable uniform dough. Cover with a little plastic wrap and refrigerate for 30 minutes.

Roll out on a lightly floured surface until about 1mm thin. Dust off any excess flour with a pastry brush. Cut into 8cm long x 2cm wide strips, then make a slit in the middle of each pastry to twist the end through.

Heat copha or vegetable shortening to about 180C in a deep thin-based fry pan. It should be about 4cm deep and abole to hold 4 pastries at a time. Drop pastries into oil and cook for 5 seconds on each side or until they are just starting to turn golden. Use 2 skewers to turn and remove pastries onto a layer of paper towels.

Allow to cool before arranging layers on platters and dusting off with some icing sugar. Crostoli will keep uncovered for 2-3 weeks in tha pantry.

I am so happy to see this recipe in local language I can understand…. my mum used to make these for us when we were kids… thank you!

At last, a Crostoli recipe without the need for pasta machine – thanks! Cannot wait to try out

You are welcome! My Mum always used to roll out by hand. Best to sue a marble or wooden rolling pin, or if you have neither a wine bottle is also great!

looks awesome. cannot wait to try. i bookmarked this with my cookmarked.com account!

I had a different recipe, but tried yours and it is the best