You may have noticed that apart from the occasional lamb shanks or frenched lamb cutlets I don’t cook much lamb… It may be the fact that I grew up in those parts of the world where mutton was much more widely available than lamb, and because of its extra strong flavour it was never a meat of choice at my Mum’s. But, every now and again, I get a little craving for lamb and I have found that using mince, as versatile as it is, is great to make the strong flavours of lamb more palatable. However, if like Mr Chipconnoisseur, you’re even a lesser fan of lamb than me, you can use any other type of mince for the same delicious result.

Secondly, you may have heard / noticed / read, that I’m going through a phase of loving all things tomato at present. I especially like and would recommend truss. They are just so meaty, and juicy and flavoursome! If you can’t get your hands on the colorful heirloom varieties, any ripe fruit will do (yes, tomatoes are botanically classified as fruit). Store them out of the fridge for best flavour.

Now for the slightly unexpected: home made hommus. I needed some “sauce” or creamy mash that would go well with the dish, but potatoes just seemed out of place for this. That’s when I thought of hommus.

Making hommus from scratch is actually easier than I thought! And the result is so much more nutritious too. Simply whiz some canned chickpeas with a pinch of salt, a little sesame and peanut oils and voila! A gourmet dip for just over $1! Now I’m addicted.

I omit tahini (sesame paste) used in the traditional hommus, and use sesame oil instead because it is one of those ingredients that I wouldn’t use for anything else, so I find it a bit of a waste to buy a whole jar just to make the dip. For extra flavour, serve tomatoes on grilled slice of bread spread generously with feta. 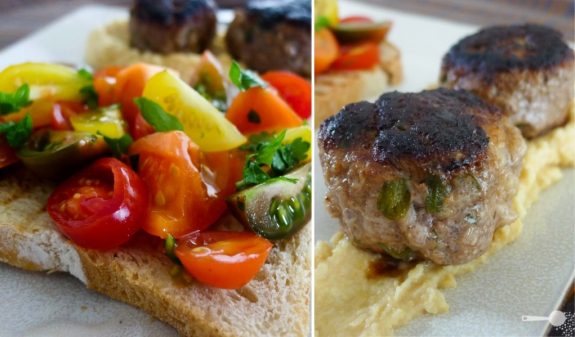 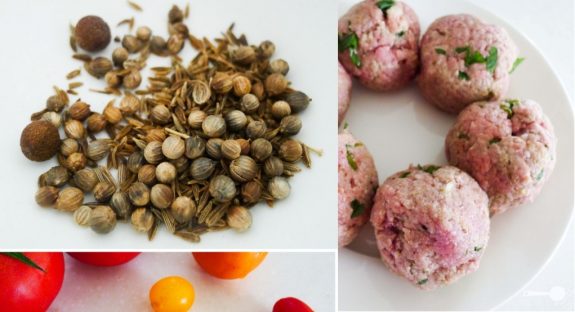 For kofta balls, tear bread into small pieces and soak in milk until mushy. Combine all ingredients in a bowl and mix well. Form 12 meatballs.

Brown meatballs on either side in a pan, then lower heat and cover. Allow them to cook through for about 3 minutes. Turn the heat off and allow to rest until ready to serve.

To make hommus, drain chickpeas and reserve the juice. Place chickpeas plus 1/4 of the juices from the can in a measuring jug. Add oils and salt. Blend together with a stick blender. Of the mixture is too dry add more juices or peanut oil – your choice. It should have a consistency of creamy mash potato.

OH MY. I think my heart stopped for a second when I saw that first picture. This looks absolutely AMAZING.

Ooh thank you! Now you see why I’m addicted :-)

Yayayaya heirloom tomato salad is delicious.
Hamish makes a lovely one.
I would make these kofta’s in a heartbeat!
Yum! Yum!

Thank you for your kind words, and for popping back from time to time :-)

Intersting hommus recipe! We always put lemon and garlic in as well to add some extra zing! Its delicious on toast with avocado..

I think lemon and garlic (and paprika) are great additions too, I ommited them in the hommus base to make it mellow against the tomatoes and the spicy meat balls. But good point! :-)