Many people are not sure how to eat or cook blood pudding (also known as black pudding). I thought I’d share this simple blood pudding recipe using pork belly’s least popular cousin. What is black pudding?

Blood pudding (black pudding or kaszanka [ka-shan-kah] in Polish) is a pork sausage filled with buckwheat pork and pork blood. Similar to the Spanish morcilla, French boudin noir and German Blutwurst, only better.

How to cook blood pudding?

It’s sweet and delectably crunchy on the outside when grilled or fried. Enjoy it cold, sliced as part of a meat and cheese platter. Because of the buckwheat filler, unlike the German Blutwurst, it actually has a pleasant non-pasty texture. Really worth a try!

Since April is a month of PorkFest in Australia, and the sausage is rumoured to make an appearance at the London 2012 Olympic Games,  I thought I’d share this simple blood pudding recipe.

Growing up, one of my favourite meals at home, at the school or at a weekend grill was kaszanka. The great thing about the sausage’s Polish name is that nowhere does it mention blood. It’s named after buckwheat, the other main filler specific to the Polish version of this delicious but slightly vampiric sounding sausage. 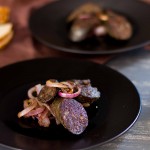 Polish black pudding (kaszanka) is best for this recipe as it contains buckwheat and when it cooks the sausage retains its shape better. But other varieties can be used also. The recipe itself is simple, but very satisfying. It calls for plenty of onion and pepper, and as with most Polish dishes, a side of lightly buttered sourdough.
Prep Time5 mins
Cook Time10 mins
Servings: 2 people

I’ve never had black pudding, but this version sounds especially good. Where can I get some in Sydney?

There are a few Polish delis around. I like Tatra in Parramatta the best as they have tha biggest choice of smallgoods. Others inlcude Euro Taste Deli in Roseville and a small outlet at the Polish Club in Ashfield. I also think there are delis in Marayong, Liverpool and Bankstown, but I’ve never been… Some regular butchers also sell black pudding, but it doesn’t have the same buckwheat-y consistency as the Polish one.

I’m not easily put off by food and the Spanish morcilla sausage is one of my favourites but I never heard of frying it. Looks delicious.

OK – we’ll not talk about pork or saturated fat or anything, right! We are foodies! And this must be one of my very, very favourite foods!! Nothing, absolutely nothing tastes better at Christmas or other winter festivities than ‘verevorst’ [‘blood sausage’ ;) ! ] or kaszanka! Oh, to get the best methinks, one better do one’s homework and get some right friends in the right places!! Actually the only better version I know is without the casing, fried as a small pancake! In my childhood days I would have given absolutely anything to stand at the stove and hope all of the following pan of fried goodies were for me :D !

I know for sure I’d love this! I know so many people that screw up their faces at the mere mention of blood sausage even when they haven’t even tried it. Lightweights!

We don’t call it blood pudding in Britain – it’s black pudding everywhere. anyway, that doesn’t matter, this looks delicious. My dad keeps trying to get me to try it – I never have. I am much more adventurous with food that I used to be though, so I may well give black pudding a go very soon!

Thanks for the pick up, I knew from my British English teachers it was black not blood but somehow I have snuck it in… I find black much more appealing than blood. PS You might want to listen to your Dad on that one :-)

What a coincidence that I wrote about black pudding and you said you were planning to post abut it. It’s such a pleasure to see Polish black pudding! (I don’t have any Polish grocery here, only a multi-ethnic one which sells luckily Polish fresh cheese but no other fresh products, so I haven’t had it for ages…). I loooooove black pudding (I taste it in every country I visit because mot countries make something similar; sometimes it’s not good, but I have had excellent one in Britain and some French ones can be fantastic, but unfortunately it’s very soft with thick skin, so it’s impossible to fry it in your delicious crispy way… I have to prepare it in different ways. I think I’ll take out the black pudding I have in the freezer…

I haven’t tried this one yet.. looks like a wonderful dish, especially if it has your stamp of approval!

Thanks Smidge, that’s very kind if you to say :-)

How interesting. I didn’t know there was a Polish variety. I tried blood pudding for the first time in Ireland last year. I really liked it. It would be fun to taste a different version.

I’m not sure if I could do this one, Martyna – but you do make it look good!

Of course they do, kaszanka was one of the first things I wanted to learn the translation of to English when I started learning the language – with British teachers! Why did I say that… so who calls it blood, then?

I was super jealous and thought you made your own. OK, let me rephrase. I’m still jealous. What a great dish. But I really want to make this from scratch and we can’t buy blood. It’s led to many amusing looks when we ask.

This black pudding recipe looks deliciously simple and your photos are awesome as usual.

This is a dish I have not yet tried. I think it is one that I will need to wait until I can get meat and sausage from a reputable butcher.

I’ve never had black pudding but I learned about this from another blogger. I think I’m a lot more educated about the food in general after visiting all kinds of blogs! I’d love to try this when I find it. This is my 2nd time seeing black pudding!

As a child my mother would buy black pudding from the local butcher it came in a skin and was a horseshoe shape tied together at the end…
She’d boil it up and then when cooked she’d slice it in the fry pan with onions.
I”m 50 so we’re going back forty odd years when all sorts of offal was available and my mum had a way to cook just about every bit on offer. Old fashion things are new again with a modern twist, I even recall opening a pressure cooking and staring back at me was a pigs head … it would eventually become brawn a loaf of sorts made with the meat and gelatine.

Hi Chelle, thanks for your comment – that’s exactly how I bought mine. I’m 30 and I still recall Mum cooking livers and trotters for us. Black pudding has always been one of my favourite “sausages”, I even like it cold! I have to say I’d never seen my Mum make brawn. Dad used to like it, I didn’t so we’d normally buy it. Now that I am older I actually have come to like it… It tastes great with a little horseradish.