Sweet cherries give this Haloumi and Pomegranate salad a fresh summery twist. Served on base of chilli and coriander hommus and drizzled with a good squeeze of lemon juice, it’s a great dish to share with your loved ones. Speaking of which… we are engaged! Only a couple of weeks ago I was talking about how Mr Chipconnoisseur’s parents surprised me with a lovely gesture of including a handful of Polish traditions at a Christmas Eve dinner we had at their place, and then at 5 minutes to midnight on New Year’s Eve another surprise! Mr Chipconnoisseur asked me to marry him! I seem to have missed the earlier message that was projected onto the Sydney Harbour Bridge pylon… *sigh* but plan B, proved to be a beautiful moment and we are both looking forward to wishing each other a Happy New Year in 2050 as we did a week ago now.

To celebrate we spent Saturday morning on Cockatoo Island taking lots of “selfies” – I swore never to be seen in public with a tripod but this was different. I thought I’d share a few of the shots with you. Of course, as any self-respecting modern age bride-to-be I have taken to Pinterest, setting up 2 new boards: wedding inspirations and wedding photography love, both are work in progress.

And I absolutely love my Cerrone ring – set with a single most beautiful brilliant cut diamond, surrounded by 6 diamond baguettes – I am yet to clarify whether that’s meant to be a pun at me for breaking Matt’s jaw on a lovingly prepared crusty baguette during one of our first dates… Alas, I think it was cut into 6 pieces! I guess we now both have something to remember it by.

Don’t worry, the blog won’t be changing direction. We are going to continue to eat healthier and cut our more sugar, additives and preservatives out of our diets… In fact, I have enrolled into a 12 month Health Coaching program with the Institute for Integrative Nutrition and I hope to share some of my health food learnings with you in the coming year. Oh, and the Guilt Free Desserts e-cookbook is coming out in February as planned, too.

So, that’s my plans for 2013 – what are your plans for this year? Do you have resolutions or just small goals that you set for yourself? The following recipe has been inspired by the cover of SBS Feast Magazine (June 2012). I have added a few twists and used my chilli and coriander hommus recipe as a base for the dish. Worked a treat. You can also check out this homemade haloumi in under 1 hour recipe if you’d prefer to make everything from scratch. 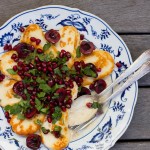 The following recipe has been inspired by the cover of SBS Feast Magazine (June 2012). I have added a few twists and used my chilli and coriander hommus recipe as a base for the dish. Worked a treat. You can also make your own haloumi in under 1 hour from my other recipe if you'd prefer to make everything from scratch.
Prep Time10 mins
Cook Time5 mins
Total Time15 mins
Servings: 2 -4

Congratulations to you and Mr. M/CC. Wishing you a lifetime of love and happiness!! xx

Congratulations that is lovely news to start the year!

And your salad looks gorgeous too. I also love haloumi and pomegranate together – didn’t think to add cherries. Great idea!

Thanks Mel. I’ve tried haloumi and watermelon but neither pomegranate nor cherries before. It’s really nice!

Congratulations to you! I hope that you have a wonderful life together!

That salad looks divine – I’ll definitely be trying the recipe soon. Congratulations on your engagement! :)

Thank you Valissa, it is worth a try!

Congrats – what a wonderful way to start the year! Can’t wait to see the ring ;D The salad sounds like a perfect way to take advantage of lovely seasonal fruit.

Oh my goodness!! What a perfect holiday! Congratulations and best wishes to you both. I’m dying to see the ring, it sounds really beautiful. Mine is so plain but I suppose plain is me. :) Your photos are so cute.

I love your salad – it’s beautiful!

Congratulations!!! Good luck with all the planning :) This salad looks wonderful too!

Oh… a wonderful congratulations to you Martyna. I wish you both the happiest of times ahead and good luck with the wedding plans. As I sit here writing this comment I’m supposed to be churning out invitations to my own wedding.. ^.^ Naughty Naughty..

Haha! Well, congratulations to you too Katie! I’m quite the opposite – new “projects” tend to get me excited and I jump straight in. Good luck with the invitations.

Delicious!! What a wonderfully exciting and loving year 2013 is to be for you. So happy for you :)
Heidi xo

congratulations!!! happy new year and here’s to an awesome 2013!

Thanks Suze, I’ve been stalking your Trash the Dress photos for inspiration too :-)

Congratulations! You look great as a couple. That salad also looks great – so colourful.

I saw the IG photos and I had to come to the post to say congratulations, Martyna! I am so excited for you! How exciting!!! Your wedding will be so beautiful and I know it!! Congrats to both of you! xo Oh, by the way, I love your laloumi salad too… pomegranate is like a jewel.. and I’m curious about your beautiful ring! ;)

Congratulations wishing you all the best and happiness in life, the photos are amazing you should bring tripods more often

Thanks Raymund – love your thinking re tripod, I’m starting to think the same!

Congrats on your engagement…I love the grand gesture on the bridge pylon. Salad looks wonderful – I need to eat less & more healthy in 2013 and I want to get good at riding my new bike.

CONGRATULATIONS MARTYNA!! What wonderful news! I am really looking forward to reading about what you learn in your course this year as I am embarking on a journey to find balance and become healthier too! Here’s to a fantastic new year of blogging!

Congratulations on your engagement! What a wonderful way to start the year. This salad looks delicious! And I’m very interested in looking more into this online course you’re doing. Thanks.

Congratulations Martyna! Mr. Chipconnoisseur is one lucky guy! I am so happy for you and I would love to take your one year healthy coaching course, if they had things like that in English here I would be all over it! Now on to that haloumi salad it is so vibrant and beautiful and it is so coincidental as I was going to serve haloumi as side dish to my meal tonight but the addition of fruit really kicks it up a bit. Take Care, BAM

Hi Bam, thank you so much for your lovely comment :-) I bet your haloumi was just as nice! And as for the course, you can actually do the IIN course online – and yes, it’s in English! Just follow the link in the post to get more info and sign up!

Hello Martyna, I am looking into right now! When are you starting your course? Take Care, BAM

How exciting! I might see you around the “campus”. I start on Monday!

A big congratulations Martyna and Mr Chipconnoisseur! What wonderful news to start off the year! :D

Oh my goodness!! I checked back in at just the right time… CONGRATS, Martyna, that’s so wonderful!!

YAY! What absolutely fabulous news… and a fabulous recipe to boot. Very happy for you both – now you get to plan a wedding as well as write a blog and develop recipes. You will be one busy lady.

Thank you :-) Busy is right although most of the big stuff I’ve done already.

The photos are so great Marty! i just found your website today… I LOVE IT!!! Thank you SO MUCH for Saturday! it was amazing!

[…] Halloumi Salad with Pomegranate and Cherries I’m always looking for an excuse to eat halloumi, pomegranates or cherries so this is a winning salad in my book. […]

Xx Congratulations to you both! xX