These gluten-free Banana Bread Muffins are super moist and because it’s a special occasion, they are topped with a fluffy 4 ingredient Vanilla Buttercream Frosting. It seems I have been baking a lot lately, but what is a celebration without some type of cake?

And there have been many reasons to celebrate over the last few weeks: Mr Chipconnoisseur’s birthday, launch of my e-cookbook and, now, Wholesome Cook’s birthday! Time flies when you’re having fun and what a great year it has been… In no particular order, here are some of the year’s highlights.

I turned 30. Found my first grey hair. Neither experience was as bad as I thought it would be.

I’ve shared: 205 pins on Pinterest, tweeted a couple of thousands of tweets and Instagramed 1,027 photos.

Cooked and posted: in the last year I published 146 posts and received 4,699 comments. 87 of the posts were allergy-friendly recipes. Freshly pressed (again): following up on the success of the Homemade Peking Duck, my 5 Ingredient Dulce de Leche and Chilli Chocolate Tart was freshly pressed on the wordpress.com home page and has been popular ever since.

I’ve gone professional: it’s been a busy year for me as I’ve began offering recipe development and testing services more formally. I absolutely love what I do, and the opportunity to work with the best clients I could ever wish for has been a pleasure and lots of fun. I ate my way through China (again): in November last year we attended a traditional Chinese wedding in Nantong (about a 2 hour drive from Shanghai). This time, apart from firey Sichuan classics, we were treated to many local delicacies which included drunken (live!) prawns, duck tongues and lamb skewers – an equivalent of the Aussie midnight kebab. You can read more about our advetures here. Aside from the slightly odd and gruesome fresh food sights, we had an amazing dining experience at L’Atelier de Joel Robuchon – voted at number 3 in Miele Top Restaurants in Asia Guide 2011/2012. I had my first: food truck experience in Adelaide. The kids attended their first bread-making class at Brasserie Bread.

Dined at Peter Gilmore’s Quay: after numerous visits to Quay with his work, Mr Chipconnoisseur surprised me with a birthday dinner at Peter Gilmore’s restaurant in March. To be honest, I wish I had ordered the same dishes Mr Chipconnoisseur did, because I found my choices to be a little… disappointing. We did agree that pork belly with prunes was superb, though, and that the Snow Egg was our top pick from the dessert menu.

Dined at Vue de Monde: perhaps one of the most adventurous dinners of all had in Australia, our visit to Vue de Monde was a memorable one on many fronts. We were seated at what can only be described as the best table at the restaurant – with a full view of the kitchen. Mr Chipconnoisseur impressed me with his willingness to try things like raw kangaroo fillet, caviar and pigeon – wittingly described by our waiter as hand-caught magpie. The food, the quirky presentation and a diy assembly of some of the dishes added to the evening’s charm. Our only concern? One of the chefs licking the sorbet spoon and then reusing it to plate up more sorbet dishes! Ooopsies!

I was a finalist in the Get Your Jelly On recipe competition: in October last year I was picked as one of only 10 bloggers worldwide to take part in the Royal Selangor Get Your Jelly On competition to help raise breast cancer awareness. My daily cone-shaped entries were judged against such names as Billy Law of Masterchef fame and cookbook author LeeMei. My cone-shaped Pork Belly Terrine was picked as one of the top 5 recipes of the challenge. And a finalist in the Melting Pot recipe competition: in March I was sent an invitation by Michael Shafran, Author and Recipe Whisperer, at The Melting Pot – Australia’s first crowd-sourced cookbook, to submit a Polish recipe for a 200-strong Aussie blogger competition. My entry, Herbed chanterelle, goat’s cheese and chicken dumplings, won me a spot in the top 5.

Became a contributor to Honest Cooking: earlier this year I began contributing recipes to the Honest Cooking magazine (winner of Saveur 2012 best group blog award). My first recipe for The Best Creamy Mushroom Sauce for Steak has received over 13,000 hits in the three months since posting. And rightly so, it’s our favourite too! Published my first e-cookbook: I had been toying with the idea of publishing a cookbook for some time, and the idea finally materialised in July. My Whole Food Philosophy was launched and over 100 copies were downloaded in this first hour! My e-book has already been mentioned by the wonderful Heidi over at foodiecrush. I am in the early stages of planning my second e-book for those of you with a sweet tooth – all about “healthied up” desserts!

I hosted 12 giveaways with prizes including: a Healthy Food Guide magazine subscription, a Cuisinart ice cream maker, an Olympus camera, a Tefal Express mini food processor, a Le Chasseur French Oven set, a ticket to a food photography workshop with Penelope Beveridge. And now, I am giving away an iPad!

We got a puppy dawg! Kasha, our little Jack Russell, has been dubbed the cutie of the house. She is mostly well behaved – when she is not we call her the Jack Rascal, and just like all of us, she loves her food! She is also the one who tells me when I’ve been spending too much time at the computer and it’s time to cook something. Love you Kasha! I was also invited to take part in the Great Australian Bakeware competition and had my recipes featured in Huffington Post’s Kitchen Daily and Summer Recipes: Top 10 and NorthSide News. I guest blogged on Ang Sarap and Wandering Spice,  interviewed Penelope Beveridge about her work and photography trends. I reviewed cookbooks, recipe apps and was inspired by a number of magazines. What’s in store for Year 3

More recipes that are easily adaptable for food allergies, more foodie features, guest posts by others on Wholesome Cook, exciting giveaways, Monthly Newsletter for subscribers featuring exclusive competitions, Aussie event calendar and lots of handy kitchen tips… Hopefully another cookbook, and who knows what else!

Thanks so much to everyone for reading and coming back and leaving feedback. It is one of the most rewarding experiences to hear back from you.

Now for the recipe… 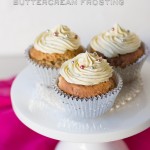 These gluten-free Banana Bread Muffins are super moist and because it's a special occasion, they are topped with a fluffy 4 ingredient Vanilla Buttercream Frosting. Dairy-free spread can be used instead of butter - nut oil or light-tasting olive oil is also great for use in the muffins. For banana bread, use a loaf tin lined with baking paper.
Servings: 12

For the Buttercream Frosting:

To make the Banana Bread Muffins:

To make the Buttercream Frosting:

Happy Birthday to Wholesome Cook! Love everything about your blog will stick around for year 3 for sure. More photos of puppy pleeeaaaseee – she is adorable! And grats on all your achievements this year.

I’ll try to grant you your wish Steph – from time to time Kasha gets in my shot, perhaps I could not crop her out next time :-)

Well done Marty! Awesome job on the blog and all your escapades. You are a brave soul for trying those prawns in China. Love your book. And Kasha. Keep up the good work!

Thank you Anne. Re prawns in China… you should try everything at least once I say.

I knew in just that short meeting in Sydney at Penelope’s presentation that you were going places. :) Your success is not due to luck, it’s due to hard work, talent and persistence. Well done!

Hi there, I just came across your blog looking for gluten free baking recipes and found this! I love banana bread but since being diagnosed with an allergy I haven’t been able to enjoy it. Will give this recipe a go. Great that you can make it into cute cupcakes too!

Congrats on all your achievements Marty :-)

Congratulation Martyna on hitting year 2!
We wish you sweeter successes in you new year to number 3 :D
You are natural and we have no doubt we will see your work hitting a fabulous hard cover gracing the shelves of established book stores!
Keep strong, keep in faith, remember yourself always ~ XO!

Wow youre on a roll, Happy Anniversary!

Thank you Jennifer, love your work! She is our favourite, apart from when she tries to wake us up, very excitedly, at 5am!

No, that comment was from me, not Jennifer! I love the puppy, I had a little JR once!

Oh yum! This one is goin’ straight to the recipe holder on the bench! Thank you :-)

Happy 2nd Martyna! Love your work and all the fun things happening on your blog :-) To countless more!

Thank you Sneh, love your work!

Happy 2nd Bloggaversary! Wow what an amazing year you have had! May your 3rd year be filled with many more wonderful things!

Thank you Anna, love your work!

Congratulations Martyna!!! What a wonderful 2 years you’ve had. All your hard work is paying off and it’s wonderful to see you go from strength to strength. Hears to many more years to come!

Thank you Jennifer, love your work!

Happy 2nd blogiversary Martyna – what a journey you’ve been on so far, can’t wait to see what year 3 brings!

Happy 2nd Anniversary! No one can tell that your amazing blog is ONLY 2 years. Look at how many achievements you have accomplished? Congratulations on everything and it’s all due to your hard work, Martyna! You have been and will continue to inspire me. These muffins are so cute to celebrate this happy occasion. Congrats!

Martyna I am so proud of you. so many accomplishments this year alone! You can do anything you put your mind to. Take care, BAM

Nice recipe :)
I also like the below banana bread recipe.
http://www.wascene.com/food-drink/delicious-banana-bread-recipe/
Thanks for sharing,
Kelly

Hi , love the website .. Quick question once you add the butter cream frosting do you need to refrigerate … If serving the next day..