Seriously, it takes less than 15 minutes to make a batch of these delicious Mini Churros. And this simple (gluten-free, if you prefer) choux pastry can also be used to make cream-filled Eclairs and Profiteroles. And yes, ready to be devoured in under 15 minutes. I was inspired to whip up a batch for datenight dessert the other night because of this this Spanish donut-making video. It makes it look really easy, and hands down, it really is! While I used my regular choux pastry recipe for us, I wanted to make sure I got the gluten-free version right for you also. The churros in my photos are in fact gluten-free. The texture of the donuts is so much lighter than the regular flour choux, almost too fragile to handle hence the churros turn out a little squiggly. Delicious nonetheless.

Oh, and the same choux pastry can be used for my other favourites: eclairs and profiteroles, in a slightly healthier, although cream-filled, baked incarnation. Actually, it’s much of a muchness really on the fat front so pick your own favourite and run with it… 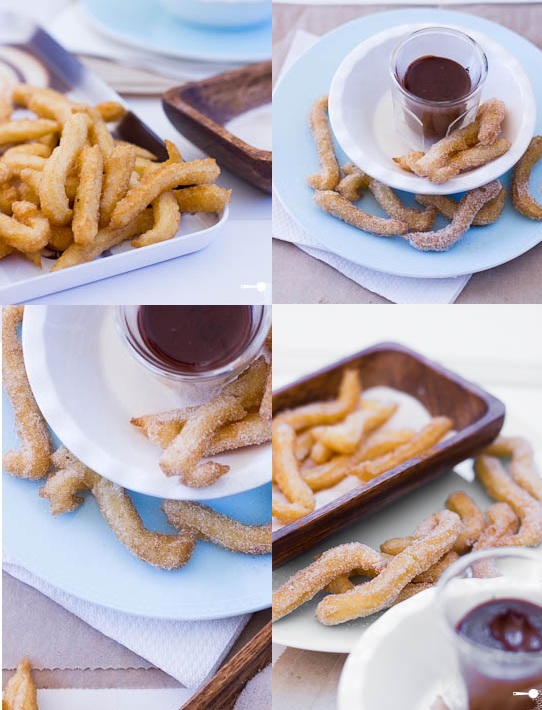 I think you can see which ones are my current favourites though! I think the Chilli Chocolate ganache-like dipping sauce has something to do with it. What do you think? Cinnamon or sea salt would work just as well if heat is not your thing… 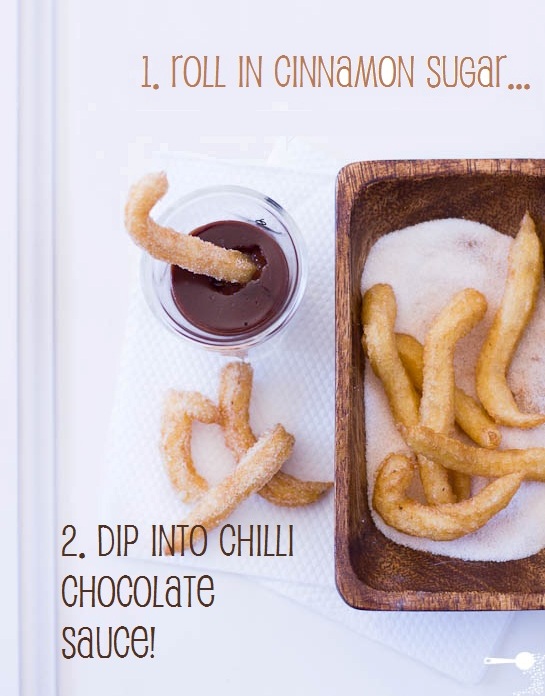 Now, naturally, these are not an everyday food eventhough they are so temptingly easy to make. Best enjoyed when friends come over of when you have a datenight with your own special  Mr Chipconnoisseur. So, tell me, have you had churros before? Would you make a batch at home? What would you add to the chocolate? 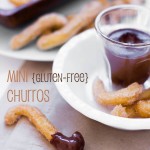 This 5 ingredient gluten-free choux pastry is super quick and easy to make - perfect for those Mini Churros, or for eclairs, profiteroles and cream puffs. You will need a piping bag (single use is fine) and a small star-shaped nozzle - mine was about 6mm wide. For a regular version using plain flour, use 1/4 cup of flour and 20g butter, method remains the same.
Prep Time5 mins
Cook Time10 mins
Total Time15 mins
Servings: 2

For the gluten-free Choux Pastry | Churros:

For the Cinnamon Sugar:

For the Chilli Chocolate Sauce:

To Roll Churros in Cinnamon Sugar:

To make the Chilli Chocolate Sauce:

Oh my! I never knew churros were so easy to make… Adding to my to do list ASAP.

Thank you so much for this recipe. My daughter has been diagnosed with a gluten intolerance recently and this will be a great treat for her as she can no longer eat regular donuts. Have a great day.

Oh my gosh these look amazing! I love churros!

I want some right now, my mouth is watering just looking at them. I would definitely make some at home, and maybe try adding salt to the chocolate as you suggested. The salty sweet combo would mean I’d have to make a double batch! Hahahaha

The last time I made choux pastry was when I was in college studying professional cookery, over 20 years ago! Your churros are just divine and I’d love to try them with both salt and the chocolate. Actually, a little orange zest and cardamom would go nicely in the chocolate as well!

Oh yes! Orange zest and cardamom would be a nice addition too.

Your photos are very pretty. I just want to reach in and grab the churro in the last one. Lots of chilli for me – great idea!

These are way to easy for anyone’s good ;) Loving the orange & cardamom suggestion too!

Wow the chilli is a nice addition to this classic, I never though of that before but I love chocolate with chilli (one of the best combo ever made)

I love churros! I reckon I could eat about 100 of them in one sitting.

Haha! You might have to tripple the recipe to get that many :-) just a tip…

These look spectacular! I’m with Spencer… I have no “full” switch when I eat churros. I can just keep eating and eating them. I’ve been looking for an easy churros recipe lately – I’m definitely giving these a go!

Enjoy – I think churros are that type of food that you just can’t stop at one. Or two. Or twenty.

These look amazing! They are sooooo cute. I love my churros covered generously with cinnamon sugar also. With me, you can’t just stop at eating one churro. My hand just keeps going back for more, and my mouth just keeps chewing!

Haha, that’s exactly how I feel about my churros! Perhaps that’s why the recipe is only for a small batch. Otherwise it would be very dangerous! ;-)

I always thought that churros were a big production but 15 minutes is no time at all! :)

Ha! That’s exactly what I thought but seeing that video opened my eyes to how easy they are to make!

Yum! So pretty! I love profiteroles, and these look super delicate and delicious!

Oh my goodness! How did I miss this entry? Its booked marked now for safe keeping. My boys would go nuts over these little churros. I was thinking I might even try dipping them in some nutella. What do you think? Take care, BAM

Oooh nutella would work too, just heated up a little… now I’m thinking of making some again!

Yum yum yum and even more so yum for all us glutards out there hanging out for weekend when eclairs shall appear. Thank you so much for sharing such yummyness

Yay! Glad I could help – they are soooo good! Enojy. Eclairs are my favourite indulgence.
PS LOL: I only once before heard the word glutard but have been too scared to use it since I am not one. It would be politically incorrect of me.

Reply
Coffee Cream Eclairs and the Only Choux Pastry Recipe You’ll Ever Need | Wholesome Cook July 17, 2014 at 11:16 am

[…] Hands down, this choux pastry recipe has never failed me. I have baked it in gas and electric ovens. In Sydney and overseas. I have made it into all of the aforementioned shapes and other sizes. I’ve used gluten-free flour and fried it as churros! […]

We also offer Churros as a dessert in our restaurant. Good idea to have them gluten-free.